Central Otago is quickly becoming a mecca for great rides in NZ, with the brand new Lake Dunstan Trail and the Roburgh Trails being just two options in the area. Sara, Evo's senior graphic designers parents recently took the trip south from Hamilton to Otago and reported back on the trails they explored.

Having spent our wedding anniversary down in Queenstown in early May 2019 and ridden from Arrowtown to the Gibbston Valley and several years earlier the Otago Rail Trail, we had put more rides on our Bucket list...

As we only had 5 days booked for leave, we flew to Queenstown and drove to Clyde where we based ourselves for both rides. Staying at an Airbnb right in the main street a few kilometres from the Trail Journeys depot where we hired our electric bikes.

Day one saw us kitting up with our bikes and maps at the depot and heading off about 9ish for the first leg of the ride from Clyde to Alexandra along the longer 14km riverside route, which we would recommend. There is a shorter 8 km ride via the Otago Rail Trail. Although it was a chilly start the sun was shining and there was little to no wind. We came across several local walkers and riders coming towards us but other than that it was a pleasant ride amongst the trees and autumn leaves.

After a drink stop under the Alexandra Bridge where the remnants of the old bridge piers and towers over the Clutha River can be viewed, we headed off towards Doctors Point where we were to meet the jet boat for a 13 km ride down river to re-join the trail again at Shingle Creek. This part of the ride was 10 km beside the river with where the landscape although barren and rocky is quite stunning. The river was a stunning deep blue green colour. There were several steep and narrow zig zag parts on this part of the trail but it is well maintained. Riding on a weekday seems to be a good idea as we didn’t see anyone else on this part of the trail.

At Doctor’s Point (and no, no Doctor ever lived there. The miners used to say “I’m off to see the Doctor “when they went to get their illegal grog!), we could see a group of 10 or so riders that were also waiting for their ride down the river. Our ride had been prebooked for 11.30am and we were well ahead of time. Our trip down river was fully laden with both passengers (10) and bikes which were expertly loaded onto the rear of the boat and well secured.

The 45 minutes ride came with an interesting commentary about the early miners and their methods and living conditions in the mid 1800’s. Still standing and maintained by Contact Energy is the original stone hut of Mr and Mrs Heron built in the 1860’s. It was a proper house even though it was very small, compared to the miner’s stone huts along the river. These were basically overhanging rocks which had had stone walls built up to make walls and tiny openings for chimneys and very small opening for doorways.

Our boat ride ended at Shingle Creek from which we started a climb up above the river and close to farmland. We saw no one on the trail for the 12km ride to the dam. Even the group that had been on the boat with us never appeared.

We crossed the dam and rode to the meeting point at Commissioner’s Flat well ahead of time and realised we had a 2 hour wait for our shuttle back to Clyde. The air was cooling down and so were we, so we were very thankful when Dave our shuttle driver arrived early.

Most of the riders on the trail were older than 50. Being a weekday meant there were not as many people on the trail. The majority had e-bikes as we did.

There are parts of the gorge where the is no cell-phone coverage, so it is recommended to take a locator beacon. We had our own, but these can be hired locally.

We had not really prepared ourselves with food and realised too late that there was nowhere to buy food on the trail after Alexandra. There are shops at Roxburgh township, but we didn’t have time to ride there and back and be in time for our pickup.

The total ride from Clyde along the longer river path to Roxburgh Dam is just on 40 kms. It’s another 9.5 km to the Roxburgh township. From there, people can carry on to the Clutha Gold Trail a 63 kms ride which most do over a couple of days.

Our timing was perfect, with brilliant autumn weather and no weekend crowds.

We finished off our day with a hot tub soak at River Rock Estate in Cromwell watching the sun set over the vineyard.

What can we say? This trail is a credit to those who had the vision to develop it.

With the official opening of the entire trail last year, it is reported that up to 850 riders were riding the trail daily over the summer months.

A scary thought as this trail is very narrow in parts with blind bends and is two-way. As a mainly grade 2/3 trail, we would suggest that it is not for young children or riders that lack confidence. At times it is technical, with steep drops down to the water, and places where you wonder how you would pass bikes coming in the opposite direction. The ride is 42 kms with a total climb of 580 metres. 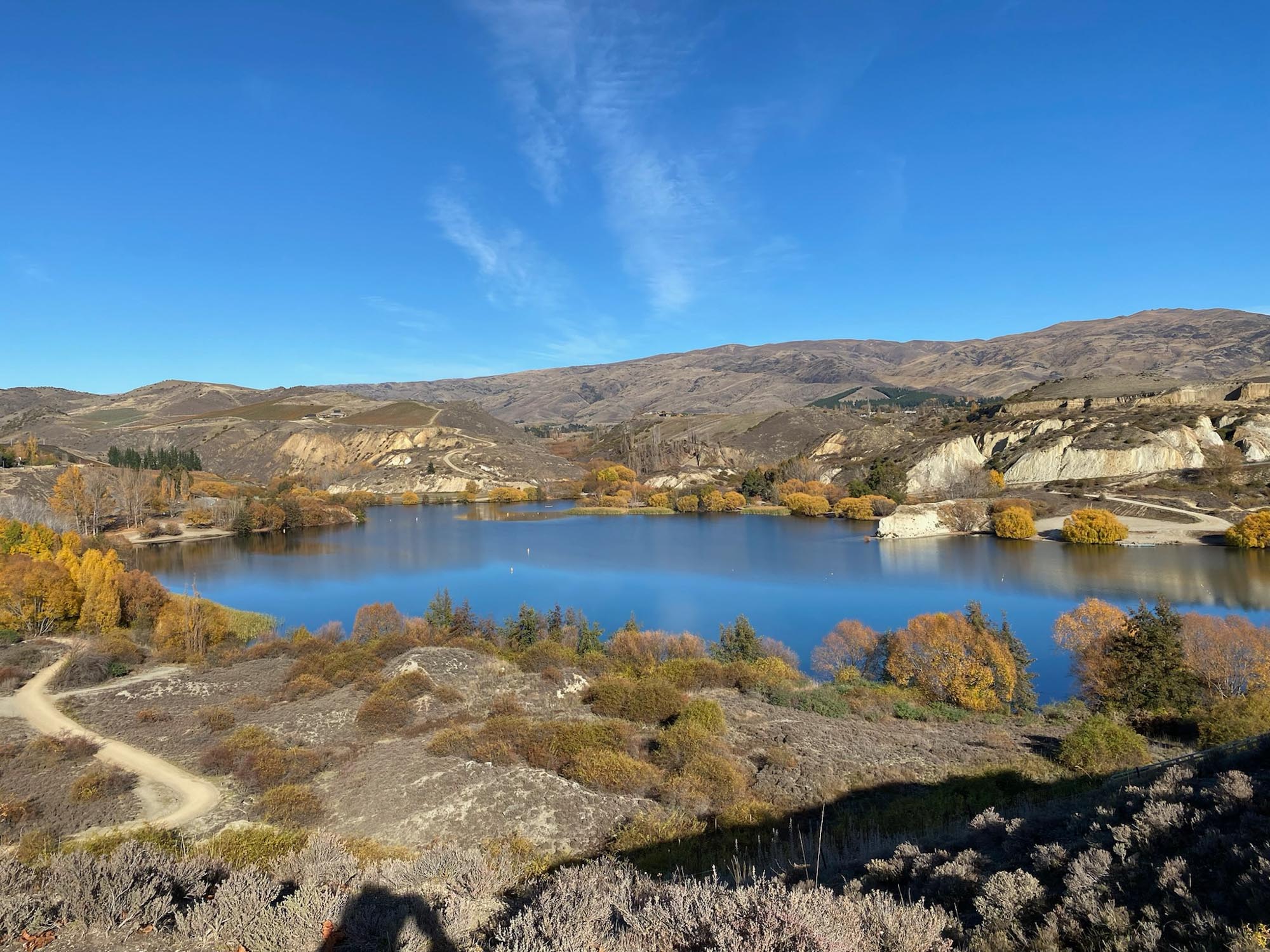 We had decided to ride from Cromwell to Clyde as most people seemed to think this was the best direction. We had another beautiful sunny, windless day with stunning reflections in the river and lake especially riding the first 13kms from Cromwell, alongside the Kawerau River then across the river on the Bannockburn Bridge and around the Bannockburn Loop to the opposite bank with a view back to Cromwell township. This part of the ride passes two wineries the most popular for locals seemed to be Carrick Winery where there was a coffee cart and some food on offer. A great place to stop and admire the view. 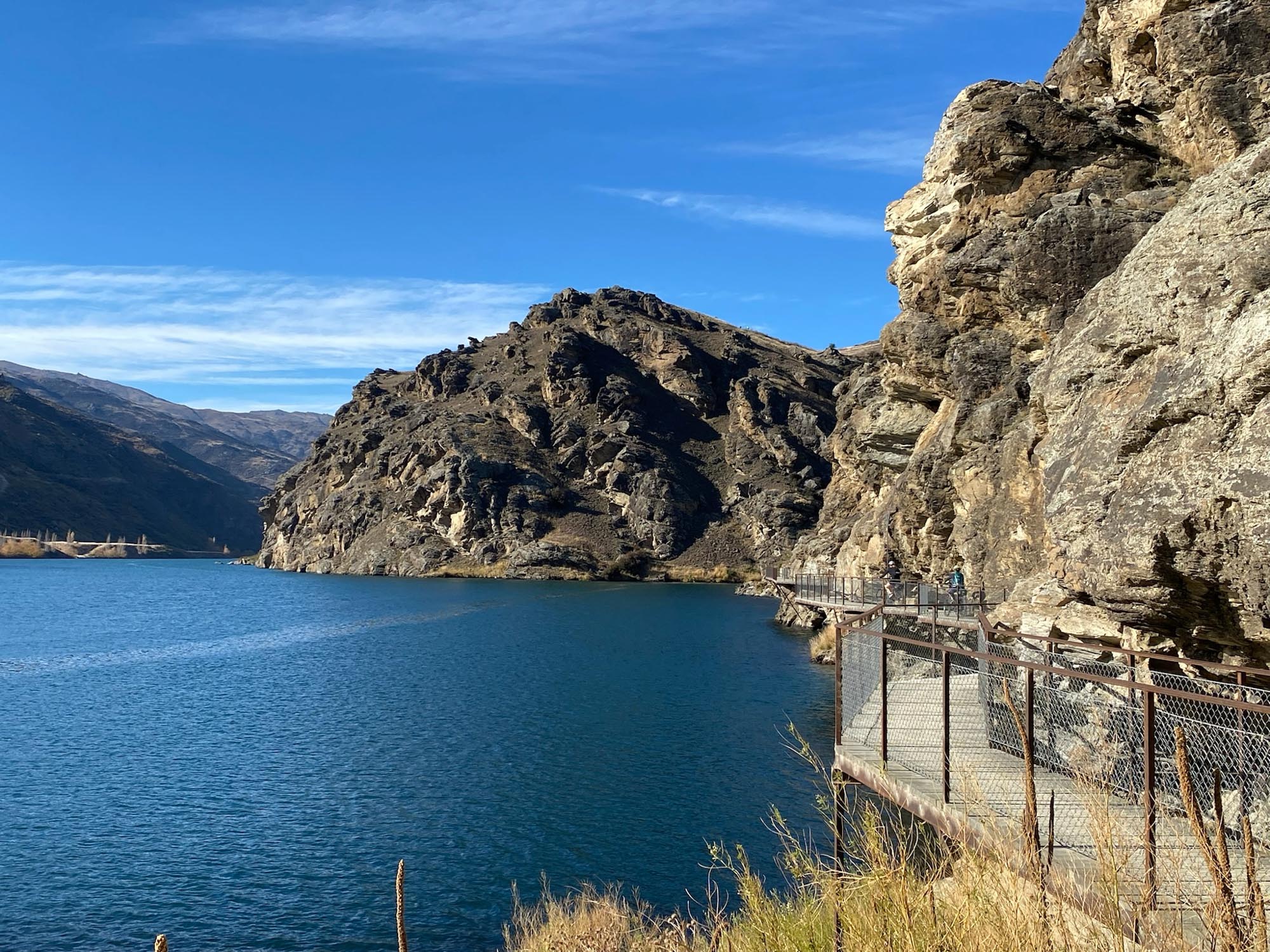 While riding the trail you can look across to the main road from Cromwell to Clyde. From the road you can see the track clearly as it makes its way above the lake.

Be sure to stop at Coffee and Burger Afloat before tackling the Cairnmuir Ladder with its switchbacks and over 300 metre climb. Our advice would be to take your burger with you, tackle the steep zig zag climb and when you are at the top take a food and drink break. 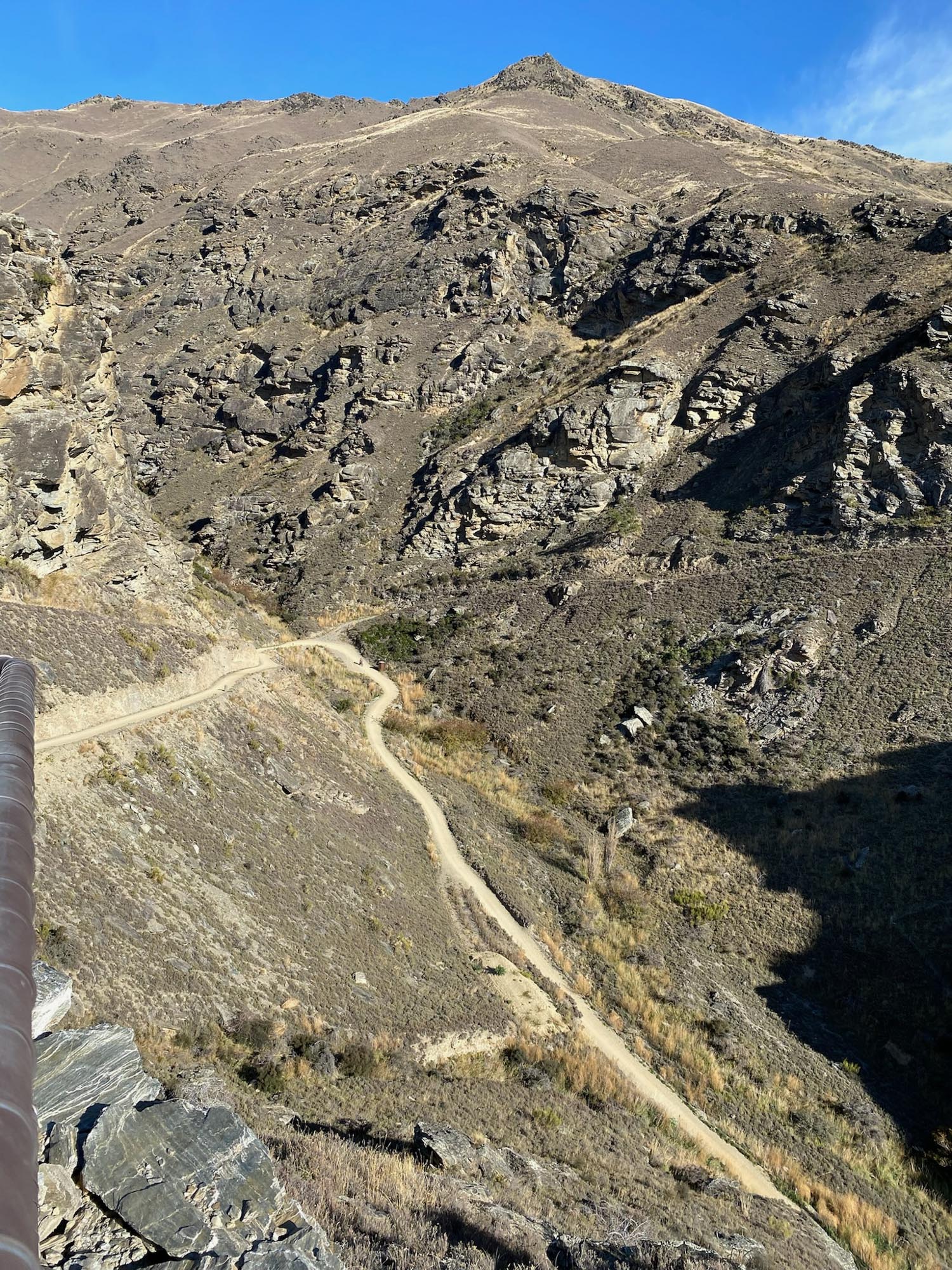 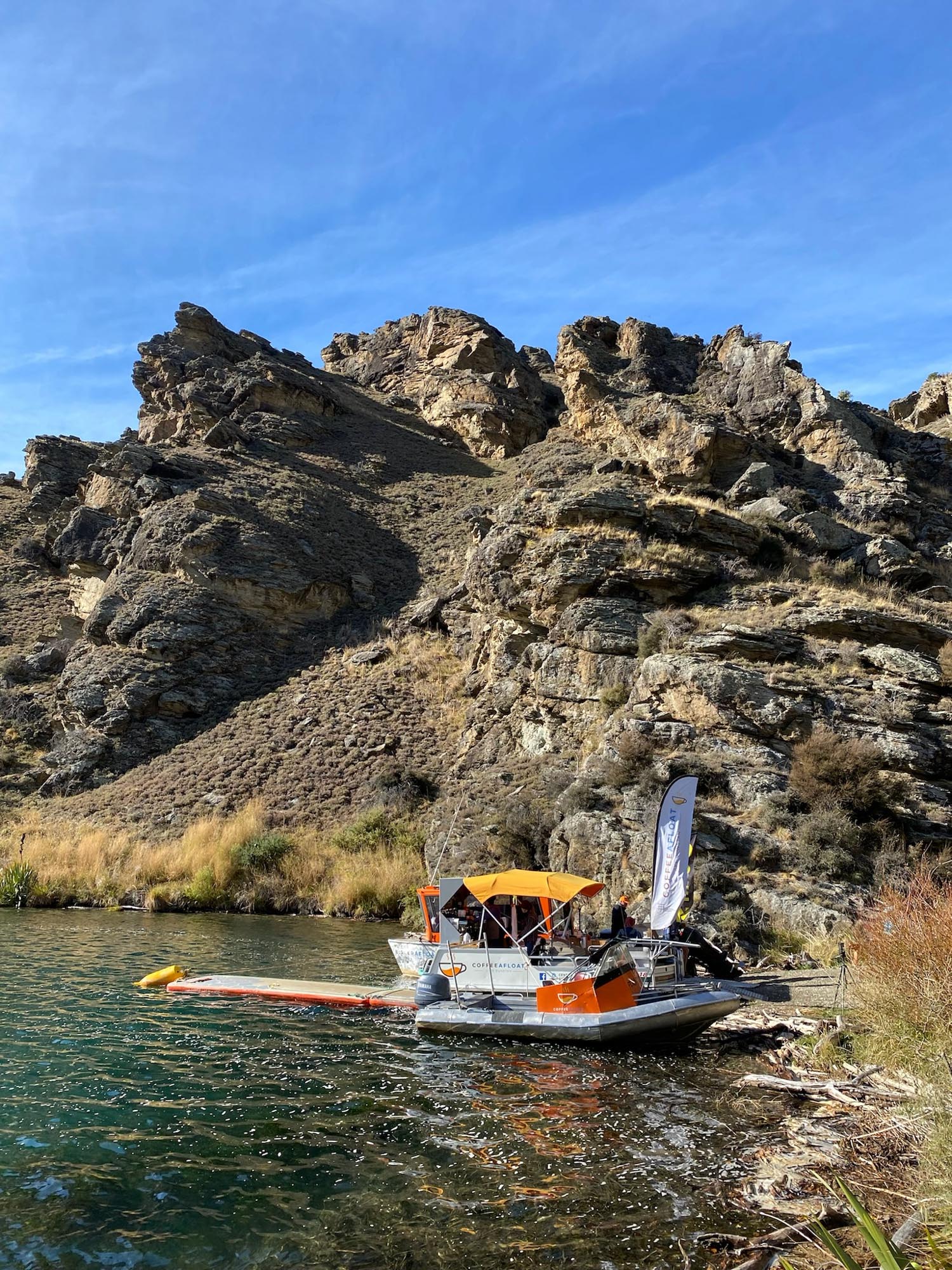 The next 20 kilometres is more remote with climbs back into gullies then dropping down gain. You cross over the 85m Hugo suspension bridge and ride along the bluff bridges which hang securely from the cliff faces directly above the lake. A real feat of engineering.

The last 10 kilometres heading to Clyde is flatter with a stretch along the road above the Clyde Dam before heading back over the river across the Clyde Bridge and making your way to the Clyde Heritage Precinct. 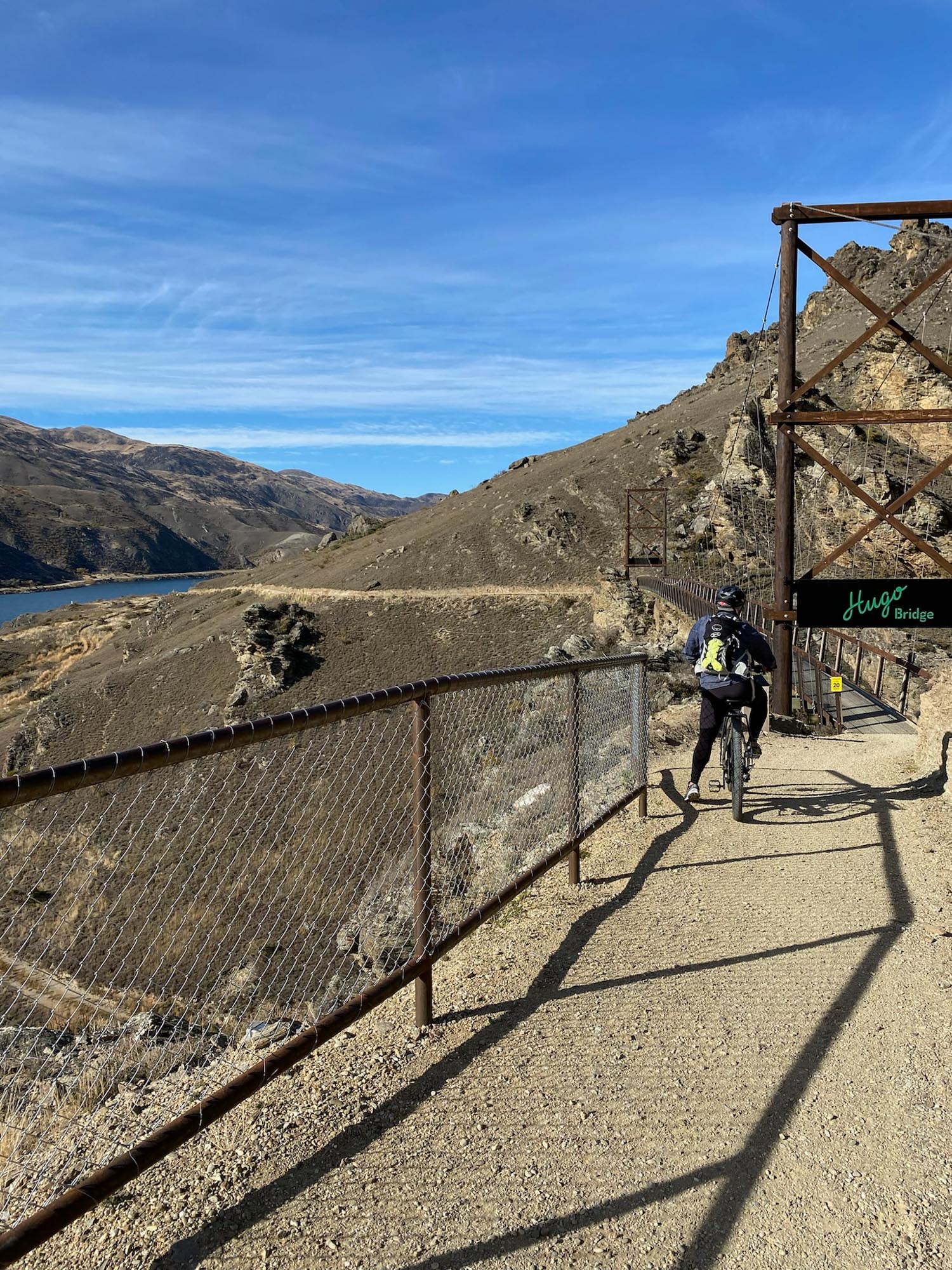 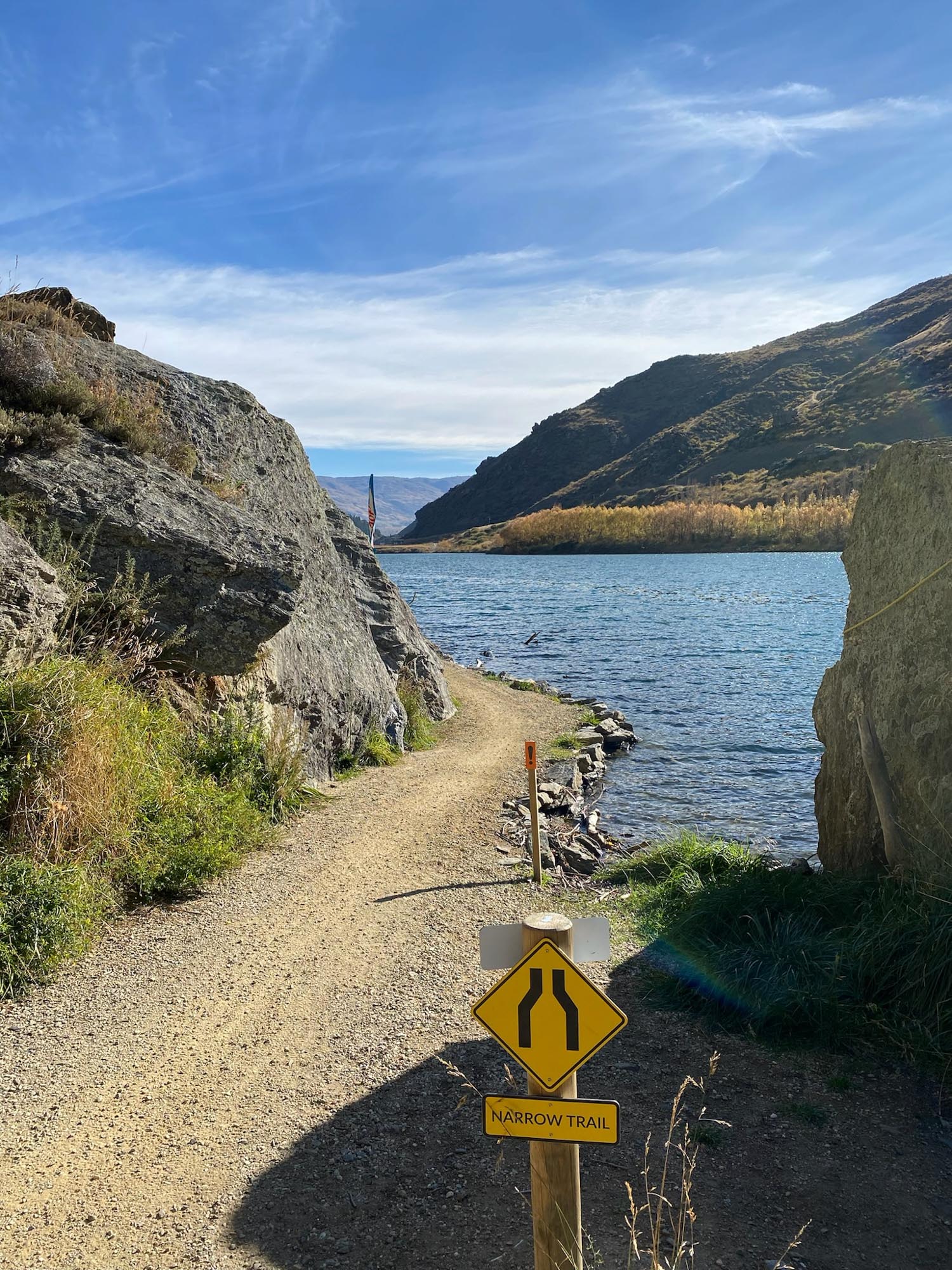 Allow 4 hours cycling time for the ride plus time for stops to take pictures and admire the views.

Being in our 60’s, we were happy with the e-bikes that we had hired but would love to take our own Giant and Liv bikes down (John’s Giant Stance E+2 and my Liv Embolden both from Evo) for an extended trip in the future.

For information on the trails and ride options in the area, visit www.centralotagonz.com/ 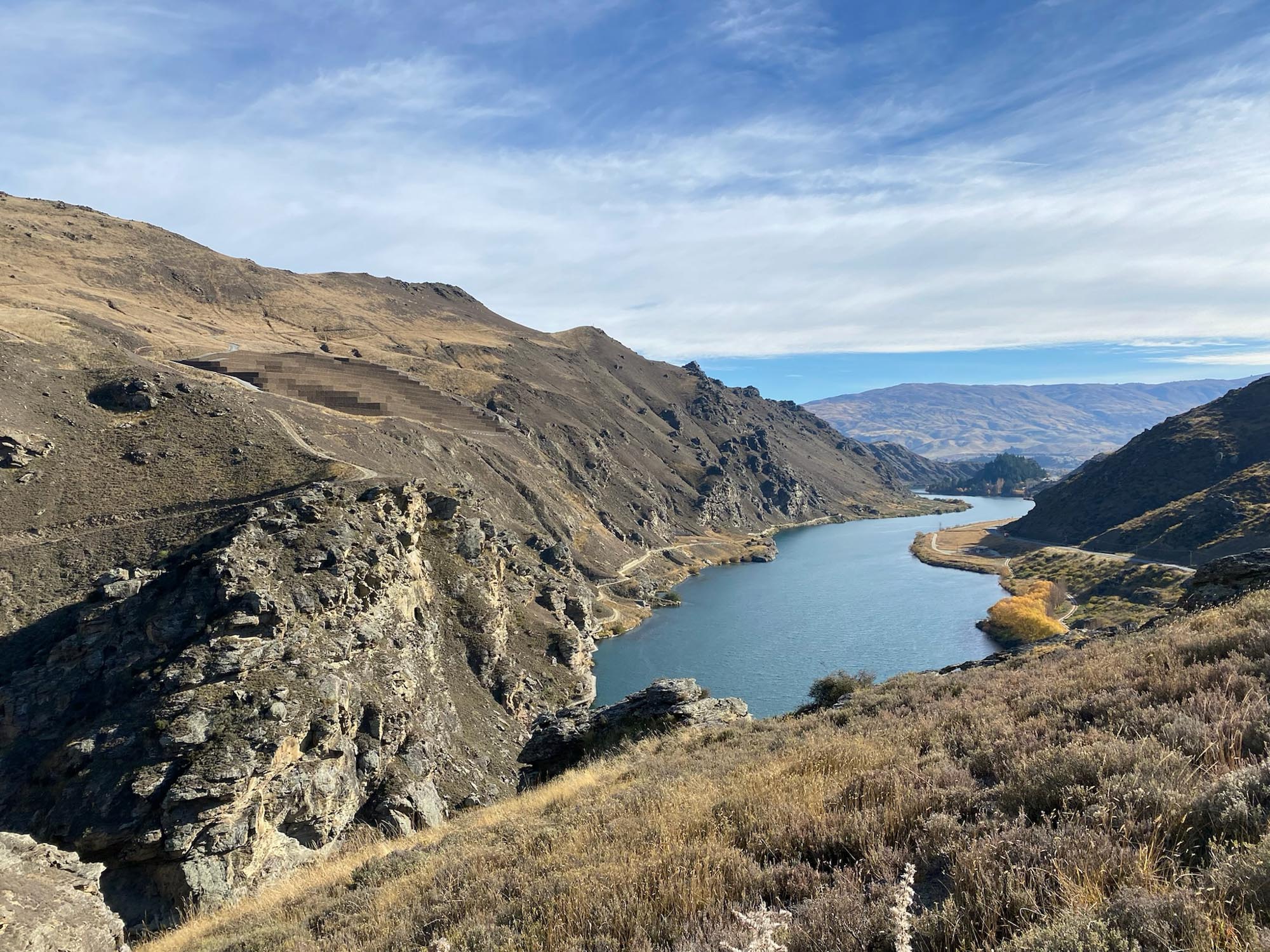 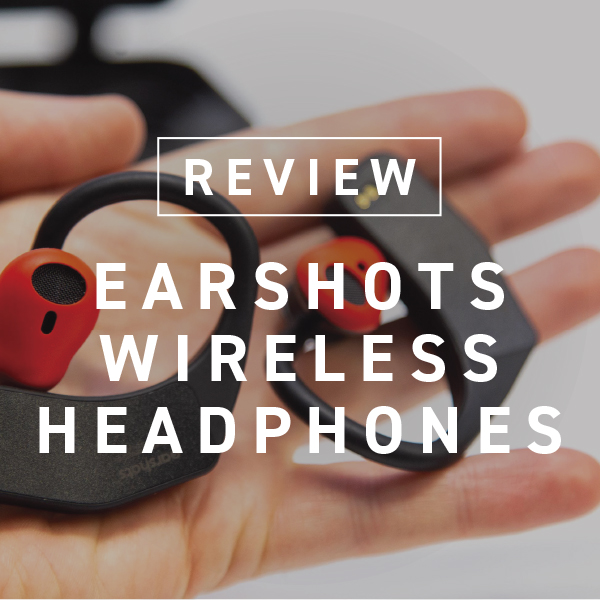 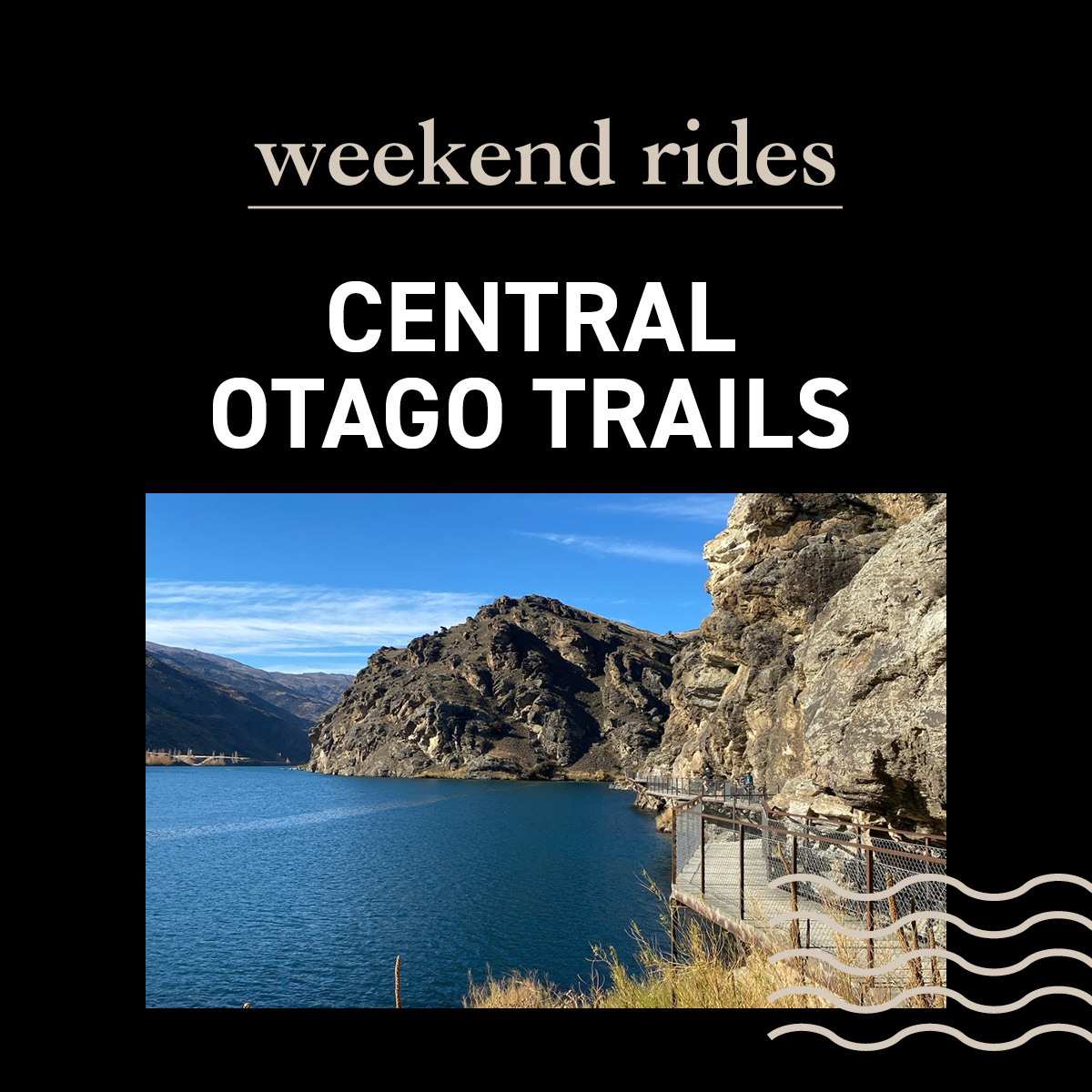 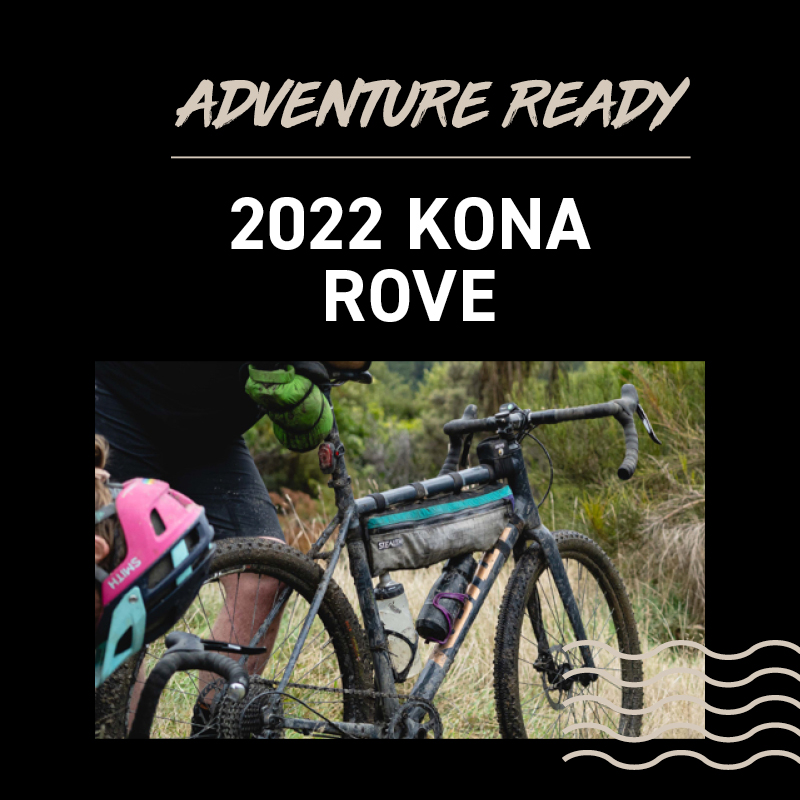 The Rove makes quick work of the commute, coffee-run, gravel trail, or the after-work fitness lap on your local hill. It's spec'd to suit your needs, is easy on the
... Read More 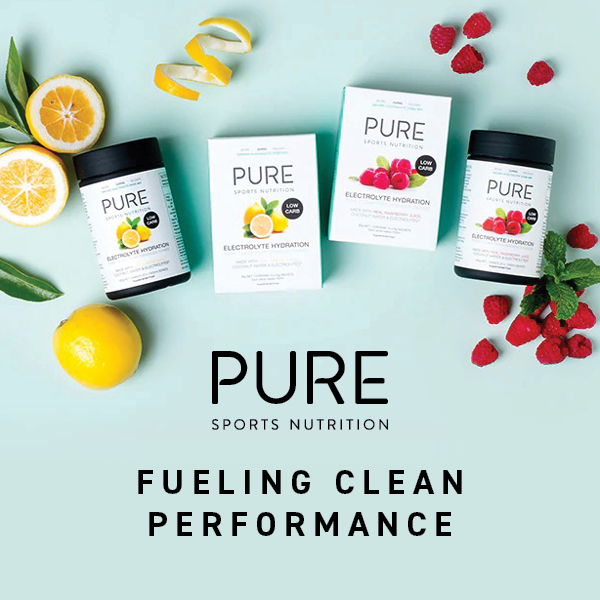 Contact Us
My Orders
Returns & Warranties
Exclusive Brand Warranties
Why Buy from Evo?

Contact Us
My Orders
Returns & Warranties
Exclusive Brand Warranties
Why Buy from Evo?